How to understand the absolute encoder feedback?

The optical encoder contains a marked code disc，the greater the density of the marks, the higher the resolution of the encoder. As shown below：

The automation industry relies on encoders to provide high performance and complex functions. Incorporating a feedback encoder into a motion control system can achieve a higher level of system performance. The automation processes are different from each other, so many different encoder options are required. Choosing the right encoder for your unique system is critical to obtaining effective feedback data. Before choosing an encoder, you need to learn more about how resolution, accuracy, and repeatability affect system performance.

The encoder pulse refers to the smallest segment of a given angle or length that the encoder can measure or recognize as movement. Think of it as the minute mark around the edge of the dial. On an optical encoder disc, the denser the scribed pattern, for example, the more minute marks are added to the front of the clock, the higher the resolution.

The rotary encoder can be used directly, with a resolution of up to 10,000 pulses per revolution (ppr), and can reach 40,000 PPR through interpolation. The linear scale provides micron-level resolution. A higher resolution can be obtained at a higher cost, but the lifetime reliability is reduced. The most common resolution for industrial control is 1,024 pulses per revolution.

A common misconception about encoders is to assume that the best encoder has the highest resolution. This idea is too simplistic and may have a serious impact on your machine. It cannot be assumed that a higher encoder resolution can improve the accuracy of the entire system. Increasing the resolution will not compensate for certain types of system errors. As more pulses are added per revolution, the ability of the encoder to report position may increase. However, if there is a system error, the higher resolution will not be able to correct the error and may cause confusion in the problem. This proves that high resolution does not always lead to higher accuracy.

The encoder accuracy solves the difference between the value read by the encoder and the physical angle in real life. Encoder accuracy is measured in fractions or degrees, such as arc minutes or arc seconds. For example, an angle of 20 arc minutes (0.33°) or better is considered a medium precision encoder. However, some precision equipment is about 5 arc seconds (0.0014°). The manufacturer can also specify the relative accuracy. Incremental encoders usually have specifications for signal duty cycle and phase angle.

Multiple sources of error may reduce the accuracy of encoder readings. One of these sources may be the manufacturing process of the encoder itself. The width of the line on the optical encoder disc will change, but the change may be small. The difference in the precise centering of the encoder disc may introduce a small error in the pulse timing generated by the encoder. Manufacturers make every effort to reduce or eliminate these errors. Sometimes, the manufacturer will use an external high-precision scientific grade encoder as a reference to measure the amount of error of the sample encoder. The sample encoder can then be fine-tuned and recalibrated to improve accuracy. It is reasonable to ask: "If there is a high-precision encoder, why not use that?" Encoders with higher accuracy and resolution are also more expensive, more robust and have a shorter service life.

In other cases, external errors may originate from the equipment or machine itself. For example, the gearbox may have backlash, or the lead screw may be playing a role in the movement. Flexible couplings have windings, and metal frames or suspended cables will grow and shrink according to temperature. In general, errors caused by external factors are even more important than "low" precision encoders. It must be borne in mind that as a sensor, an encoder can only report the position of the monitored device. The controller must accommodate all error corrections.

If the pulse recorded by the pulse is slightly longer than the other pulses, and it is detected as the same longer angle every time it rotates, the pulse is considered to be repeatable. When the encoder has excellent repeatability, many errors can be averaged or corrected in the system controller. Many applications, such as classic speed control (variable-speed motors), work well on encoders that are less accurate but repeatable.

Like absolute accuracy, external sources are also responsible for repetitive errors. The manufacturing process of the encoder, the placed equipment and even the sensor technology used can cause repeatability errors. Certain types of encoders, such as analog tachometers or certain versions of capacitive encoders, may suffer from cumulative errors, which can accumulate over multiple cycles. These are exceptions, not rules. Optical and magnetic encoders are designed to prevent accumulated errors. Generally, optical encoders have higher overall accuracy than magnetic-based units. Why are magnetic systems so popular? They tend to be more robust and reliable, and have greater installation flexibility and mechanical structure.

Like absolute accuracy, mechanical errors (such as gear backlash, hysteresis, and improper belt tension) can reduce the repeatability of the system. As with resolution, users often think that buying a repeatable encoder will get the best results. Even encoders with excellent repeatability cannot be improved on systems with poor mechanical reproducibility. If errors can be understood and corrected, a highly repeatable but inaccurate system (a combination of mechanical and encoder) can usually achieve a fully acceptable level of performance.

Encoders can become powerful elements in motion control systems. System designers should consider the advantages and disadvantages of the various encoder options available. Understanding the root cause of errors can improve system performance and simplify troubleshooting when problems occur.

The above are the three key points of the encoder.

PUSIROBOT's new encoder can provide absolute position feedback. They have a multi-turn measurement range, which is useful when the motor is connected to a screw shaft, cable drum or gear reduction system. The multi-turn rotating counter is self-powered using Specs' Wiegand energy harvesting technology. Even if the machine moves while the control power is interrupted, the number of revolutions is always up to date. No spare battery is required. The encoder of a stepper motor is a "kit" or modular device designed to be added to the motor housing and measure the rotational position directly from the drive shaft. The installation size of the kit package is the same as the installation size of the popular incremental encoder of NEMA standard stepper motors. This allows these encoders to replace less advanced incremental encoders. The diameter of the magnetic measurement module is 37 mm and the thickness is 23 mm. They resist dust, moisture and shock/vibration loads. You can use shielding to protect the measurement module from external magnetic fields. SSI and the more advanced "BISS C" communication interface have been implemented. Both are open source interfaces compatible with a series of PLCs and computers. Then, in order to improve the integration of the module, PUSIROBOT introduced an integrated closed-loop stepper motor, covering the application of incremental encoder and absolute encoder. Users can compare and use according to their own applications. 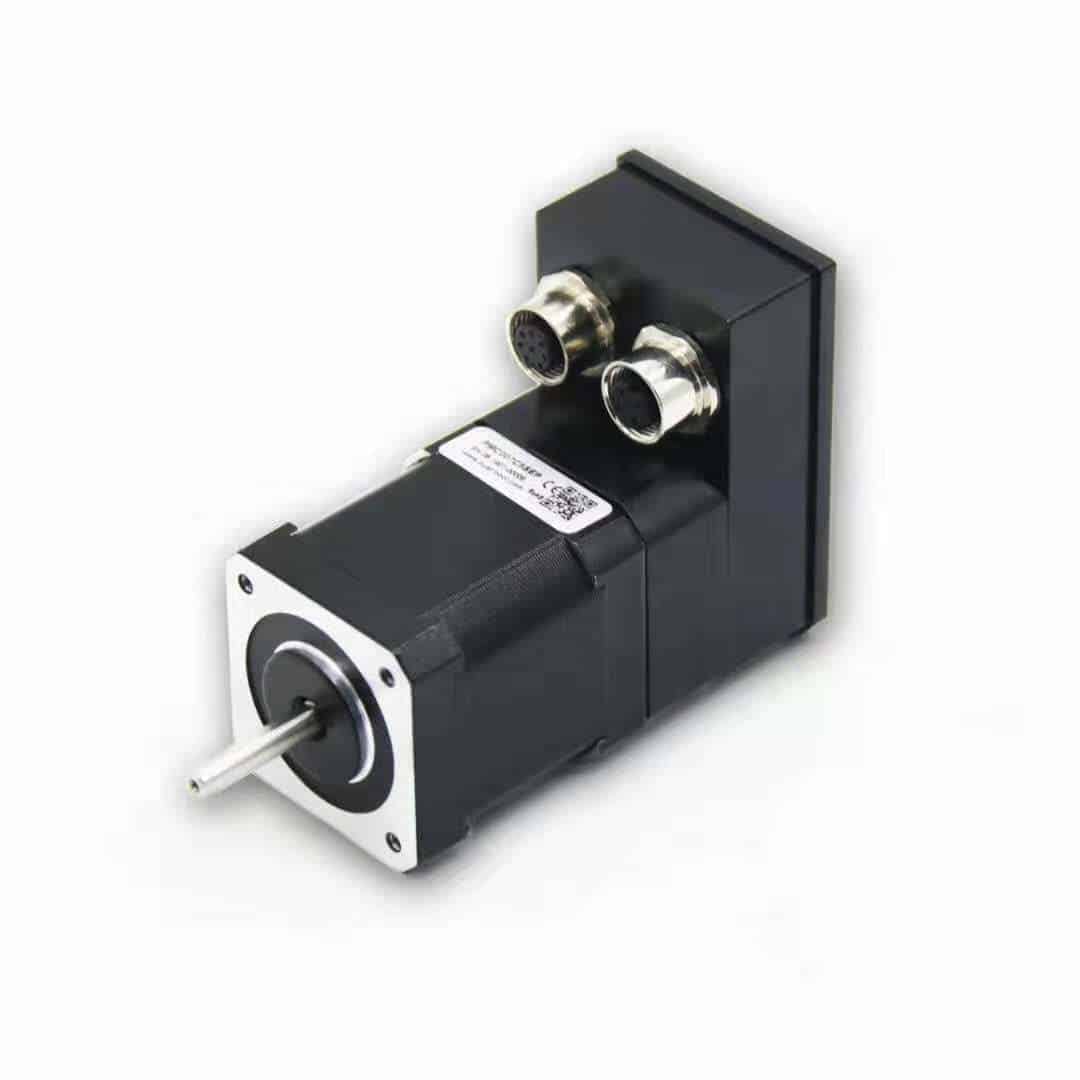