The difference between open loop and closed loop

What is a closed loop stepper motor

Closed-loop control is a basic concept of cybernetics. Refers to a control relationship in which the controlled output returns to the control input terminal in a certain way and exerts control influence on the input terminal. The closed-loop control of the stepper motor uses position feedback and(or) speed feedback to determine the phase conversion adapted to the rotor position, which can greatly improve the performance of the stepper motor.

In a stepping motor system with closed-loop control, the working speed range can be expanded when tracking and feedback with a given accuracy, or tracking and positioning accuracy can be improved at a given speed, or limit speed indicators and limits can be obtained Precision index.

The closed-loop control methods of stepper motors are roughly divided into two types:

1. Keep the phase relationship between the excitation flux and the current consistent, so that it can generate electromagnetic torque that can drive the load torque. This method of controlling the motor current is the same as the brushless DC motor control method, called the brushless drive method or Current closed-loop control method.

2. The method of controlling the phase angle of the exciting magnetic flux and the current by keeping the motor current constant is called the power angle closed-loop control method. The power angle is the phase angle formed by the mutual attraction between the rotor poles and the stator excitation phase (or the axis of the stator rotating magnetic field of a synchronous motor). This power angle is smaller at low speed or light load, and larger at high speed or high load. As shown in the following figure in the principle of open-loop control in the previous article, the "bar A" phase attracts the rotor pole, and the angle of the "bar B" phase is π/2 when the phase is excited, and the rotor pole is located at the leading edge of the "bar A" phase ( When the S pole of the rotor in the picture is on the left side of A phase), the magnetic pole "bar B" phase starts to be excited. 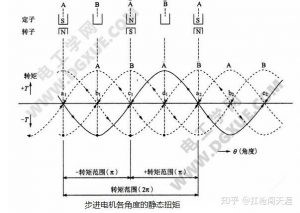 This control method is to directly or indirectly detect the position or speed of the transfer (or load), and then through feedback and appropriate processing, the drive pulse sequence of the stepper motor is automatically given. This drive pulse sequence is based on the load or There are many realization methods of this control mode that the position of the rotor changes at any time. In the occasions that require high precision, the combination of micro-step drive technology and microcomputer control technology can achieve high position accuracy requirements.

A. As the output torque increases, the speeds of both decrease in a non-linear form, but the closed-loop control improves the torque-frequency characteristics.

B. Under closed-loop control, the output power/torque curve can be improved. The reason is that under closed-loop, the motor excitation conversion is based on the rotor position information, and the current value is determined by the motor load. Therefore, even in the low speed range, the current It can also be fully converted into torque.

F. The quantitative evaluation of the improvement in rapidity of closed-loop control relative to open-loop control can be obtained by comparing the time of passing a certain path interval in step IV:

2. Whether it is effective for the current control. Open-loop control is generally a control activity completed in an instant, and closed-loop control will continue for a certain period of time, which can be used to judge.